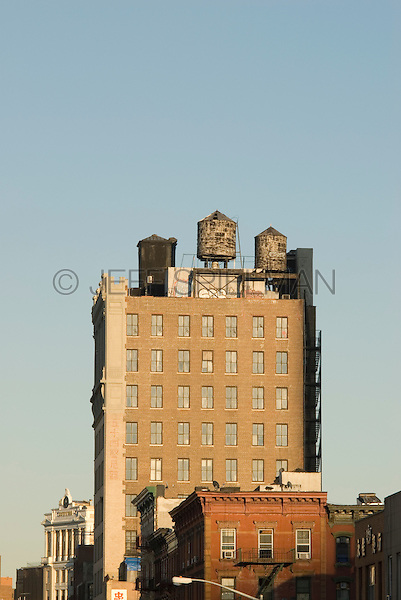 One of the Lower East Side's classic buildings, the Jarmulowsky Bank Builidng was built by architects Rouse & Goldstone in the "Modern Renaissance Style." It was completed in 1912 and was designated a New York City Landmark by the Landmarks Preservation Commission in 2009.

Jarmulowsky's Bank was a well known institution among Yiddish speaking Jewish immigrants on the Lower East Side....and their relatives still living in Europe. Immigrants here in New York City used the bank to send money to their relatives abroad....and to purchase steerage tickets (in Yiddish) so their relatives in Europe could also emigrate to the USA. World War I broke out two years after this bulding was completed and the bank failed after a bank run as depositers withdrew funds to send to relatives abroad. The building was once the tallest building on Manhattan's Lower East Side.

According to a Yiddish newspaper of the time, Sender Jarmulowsky was " living proof that in America one can be a rich businessman but also a true, pious Jew.".
© Jeff Spielman 2010